In the presence of Pujya Ishwarcharan Swami, over 8,000 dignitaries, guests, devotees and well-wishers from throughout Delhi, Punjab, Hariyana, Himachal, Jammu, Uttar Pradesh and Uttarakhand attended the grand Satabdi Vandana Samaroh celebrating the life and work of His Holiness Pramukh Swami Maharaj. The podium of the main monument served as main stage with the attendees seated on the facing lawns and central passage.

The assembly highlighted special features of Swaminarayan Akshardham through the topics of sankalp (vision), sarjan (creation) and sandesh (message).

The evening assembly began at 6.00 p.m. and featured traditional dances by youths and children, speeches by senior and learned swamis elaborating on the three topics and thematic videos. The entire assembly was interlinked by skits and dances by children, teenagers and youths.

Pujya Ishwarcharan Swami paid tribute to Swamishri and invited everyone to attend the Centenary Celebrations in December 2022.
Then, from Surat, Mahant Swami Maharaj, blessed the assembly via video, “By creating Akshardham, Pramukh Swami Maharaj has given a profound gift to the world. Swamishri was always beyond attachments and firmly believed that everything achieved was due to the grace of Bhagwan and guru.”

An excerpt of Pramukh Swami Maharaj’s blessings from the Akshardham inauguration assembly in November 2005 was shown, “We have built this Akshardham, not out of competition or to show others, but it was the wish of guru Yogiji Maharaj and is a humble tribute of Bhagwan Swaminarayan and will benefit everyone.”

At the end, the swamis on stage and youths standing on the steps raised mashals to hail the centenary of Pramukh Swami Maharaj. 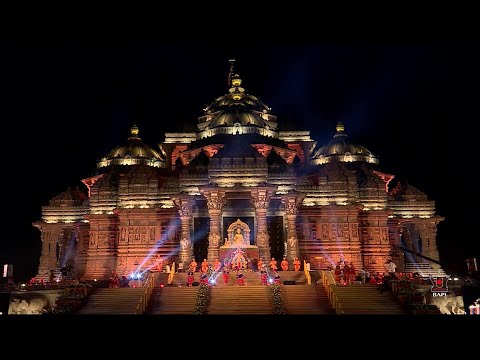 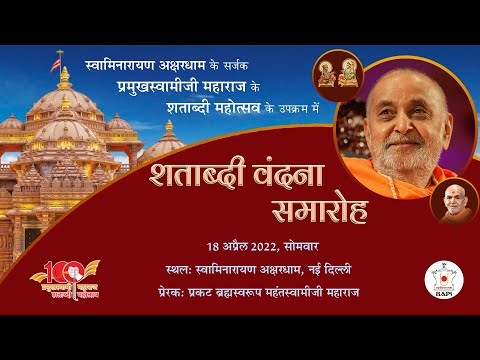