Leading women educators shared their insights on women’s role in preserving culture as a part of the daily programme organised by the BAPS Women’s Wing at the Women’s Empowerment Hall in Pramukh Swami Maharaj Nagar on 3 January 2023.

Prof. Indira Parikh, Founder and Former President of FLAME University, Pune and Former Professor and Dean at IIM-Ahmedabad, shared her thoughts on the distinctiveness of Indian culture saying, “Our ancient culture and rich values are unparalleled. For instance, Indians were well-versed in management since they managed gigantic forts and constructed large, magnificent temples.

Commenting on women’s role in preserving our traditions and culture, she said, “Today, we see many women still wearing our traditional attire – they are making an effort to preserve our culture. I too, always wear a sari irrespective of the country I am visiting for business or leisure. People around me have not only accepted it but have also appreciated it. It helps in preserving our culture. Only when we respect our own culture and country, will others respect them as well.”

Ms. Ramila Patel, Chairman Education Committee, Sabarkantha commented, “Pramukh Swami Maharaj Centennial Celebration is a priceless celebration. Especially, the importance that is given to women empowerment is a remarkable thing. Today women are taking the lead on many fronts. I feel very fortunate to get this opportunity of visiting the Nagar.”

Highlighting the value of character and righteousness that set people apart, she said, “Lord Swaminarayan once said that an individual’s good character and actions speak volumes. Pramukh Swami Maharaj taught people to follow five fundamental vows including refraining from meat, alcohol, adultery, theft, and impurity. He not only preached this but worked tirelessly for it. He organized de-addiction drives to help people live addiction-free lives. The exhibition – ‘Chalo tod de ye Bandhan (Break-free from the attachment)’ in Pramukh Swami Maharaj Nagar depicts the detrimental impact of having vices and has motivated innumerable spectators to give up their additions.” 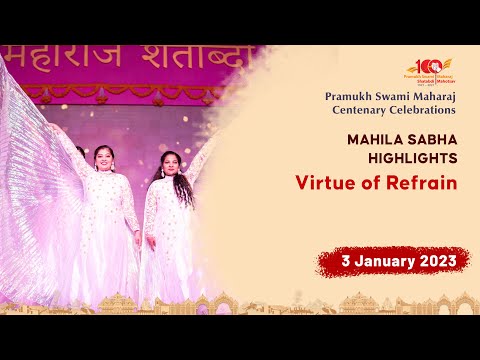