On the occasion of Pramukh Swami Maharaj centenary celebrations, an international conference was organized on “The Role and Contribution of Sages and Saints in the History of India” in Ahmedabad.  The conference was organized by the BAPS Swaminarayan Research Institute, New Delhi, in collaboration with the Indian Council of Historical Research, New Delhi. Throughout the first day of the two-day conference, scholars and students from around the world presented their original research and perspectives and participated in meaningful discussions.

The conference commenced with the chanting of Vedic hymns by Pujya Madhurvadandas Swami. Thereafter, Prof. Arvind Jamkhedkar, the former Vice-Chancellor of Deccan College, Prof. R. C. Sinha, the former Chairman of the Indian Council of Philosophical Research, Prof. Jatashankar Tiwari, a former Professor and Head of Department at Allahabad University, and Prof. Makrand Mehta, the former President of the Indian History Congress (Modern India), were welcomed by Dr. Jyotindra Dave, the Director of the BAPS Swaminarayan Research Institute, New Delhi. These distinguished guests, along with Mahamahopadhyay Bhadreshdas Swami, Brahmaviharidas Swami, and Dr. Paramtattvadas Swami, performed the deep pragatya to inaugurate the conference.

The inaugural session commenced with the welcome address of Mahamahopadhyay Bhadreshdas Swami. He highlighted how the contribution of swamis in creating, shaping, and writing history was significant because their insights and practices originated from their engagement with the ground reality. Thereafter, Brahmviharidas Swami gave the inaugural address in which he introduced the purpose of this conference as a bridge between the binaries of the temporary and the permanent. He explained how swamis are appropriate guides for history because they promote freedom and liberation. Prof. Arvind Jamkhedkar then compared different schools of Hinduism and explained how Indian thought continues to synthesize diverse ideas and practices. In the concluding address of this session, Dr. Paramtattvadas Swami explained how the Swaminarayan paramhansas possessed an awareness of history as reflected in their description of the historical context at the beginning of all 273 Vachanamruts—the teachings delivered by Bhagwan Swaminarayan. He further emphasized how the Swaminarayan tradition represents an inextricable link between religion and history.

Thereafter, various scholars delivered their presentations in the plenary session. Prof. R. C. Sinha highlighted the contribution of Pramukh Swami Maharaj in considering the significance of the histories of the marginalized. He argued that the works of swamis like Pramukh Swami Maharaj allow us to draw attention to the cultural dimensions of subaltern history. Prof. Jatashankar Tiwari then identified compassion and empathy as the key characteristics of swamis based on Tulsidas’ Ramcharitmanas and elaborated on Pramukh Swami Maharaj as a living embodiment of such qualities. Thereafter, Prof. Makrand Mehta positioned Pramukh Swami Maharaj’s contributions to society within the context of the Swaminarayan tradition established by Sahajanand Swami (Bhagwan Swaminarayan). He identified Sahajanand Swami as “the last of the saints of ancient and medieval India and the first saint of modern India.” Dr. Aksharanand Swami then informed delegates about the principles and practices of the Swaminarayan sant tradition through a case study of the Sant Talim Kendra at Sarangpur, Gujarat. He added how Pramukh Swami Maharaj “redefined the dichotomy between pravrutti and nivrutti” and created a training center that continues to prepare and inspire swamis to serve society. Dr. Balmukund Pandey concluded the session by evaluating the significance of the Indian perspective in examining Indian history.

The plenary session was followed by parallel sessions in which various scholars and experts presented original research. One of these sessions was chaired by Dr. Hamsa Stainton, an Associate Professor at McGill University. He commenced the session with his presentation on how the Sanskrit poetry in Tulsidas’ Ramcharitmanas represents a continuity from the Valmiki Ramayana. He further emphasized the need to move beyond the dichotomy of classical and elitist Sanskrit and the vernacular and widely prevalent Hindi-Awadhi. He concluded by exploring the variety of language used in the literature of the Swaminarayan tradition. In the next presentation, Dr. Paramtattvadas Swami examined Bhagwan Swaminarayan’s teaching of dasatva by studying the life of Pramukh Swami Maharaj. He clarified that humility originates from inner spiritual strength rather than weakness and that the relationship between humility and power needs to be understood in parallel rather than contradictory terms. Dr. Dalpat Rajpurohit, an Assistant Professor at the University of Texas, Austin, then explored the emergence of the Dadupanthi Sampraday within the broader socio-cultural processes of the bhakti tradition. He further emphasized how Sampraday, though born in Rajasthan, expanded to Gujarat and other regions. He also highlighted the theological profundity of the sampraday’s literature and its apparent similarities with the poetry of Brahmanand Swami. He concluded by discussing the significance of yoga in contextualizing the literary content of bhakti poetry. Thereafter, Dr. Arun Brahmbhatt presented on the centrality of sadhuta in the scholastic works of the Swaminarayan tradition. Dr. Gyanananddas Swami then highlighted the role of Pramukh Swami Maharaj in the continued relevance and lived practices of the Akshar-Purushottam Darshan—the dārśanic position revealed by Bhagwan Swaminarayan. Shri Kirtan Patel then presented the contributions of Shastriji Maharaj in cultivating a bhakti ethic amongst contemporary rationalists. Thereafter, Dr. Sabita Kumari examined the poetry of Mirabai through the perspective of madhurya bhava. Prof. Sadanand Shahi, the Vice-Chancellor of the Shankaracharya Professional University, then explored how swamis engaged and empowered all members of society. In particular, he highlighted their sharing of a cosmopolitan vision, a vernacular expression, and a common ethic of service.

The second day of the conference began with various scholars presenting their original research. Prof. Sondra Hausner, a Professor of the Anthropology of Religion at the University of Oxford, pointed out in her presentation that “principal examples of renunciation and social work are found thriving in the Pramukh Swami Maharaj Nagar.” She stressed on the role of renunciation, and argued how it is used by practitioners “to transcend earthly limitations in a worldly body. The urge for liberation is foundational to the renunciation of the ascetic.” Thereafter, Prof. William Pinch, a Professor of History and Environmental Studies at Wesleyan University, compared two historical events during the late eighteenth century: the renunciations by Sahajanand Swami and Himmat Bahadur in northern India, through the lens of Sankhya and Yoga. Prof. Shonaleeka Kaul, an Associate Professor in the Centre for Historical Studies at Jawaharlal Nehru University, then elaborated on the bhakti traditions of early Kashmir. A presentation was then given by Prof. Bhakti Mamtora, an Assistant Professor of South Asian Studies at the College of Wooster. She analyzed “the conceptions of the self and practices for self-cultivation in the Swamini Vato, a collection of oral teachings given by Gunatitanand Swami” (the spiritual successor of Bhagwan Swaminarayan). She also elaborated on the principle of agency in devotional  traditions. Thereafter, Shri Mukti Patel, a graduate student at the University of Chicago, compared the poetic compositions of Narsimha Mehta and Muktanand Swami. Shri Bhavi Bhagat, a graduate student at Harvard University, then provided a historical context of the opium trade in colonial India and emphasized the role of de-addiction campaigns initiated by BAPS. Finally, Dr. Shalin Jain, a Professor at the University of Delhi, highlighted the socio-cultural relations fostered between the Jain ascetic Harivijay Suri and the Mughal Emperor Akbar.

In the next session, Shri Abhijit Jogi focused on the process of cultural construction through history and how India’s past must be examined for points of cultural change. Shri Hershini Soneji, a graduate student at the University of Cambridge, then elaborated on verbal testimony and its importance in the Swaminarayan-siddhanta-sudha, a Sanskrit text describing the philosophical positions of the Akshar-Purushottam Darshan. Thereafter, Shri Vandan Gor, a research scholar at the Maharaja Sayajirao University of Baroda, outlined the concept of ahimsa (non-violence) as historically understood in the Swaminarayan tradition. He also explained how internalizing ahimsa is part of a larger devotional goal in the tradition. Shri Tushar Shah, a Visiting Lecturer at the University of Roehampton and a Doctoral Candidate at the University of Cambridge, then touched upon aspects of Pramukh Swami Maharaj’s ecumenism and his role in bringing together communities and religious leaders. Finally, Shri Anchit Jain, a graduate student at the University of Delhi, emphasized the role of “Bhagwan Swaminarayan and his spiritual successors in the evolution of festivals like Jal-Jhilani” and how these festivals have become global events.

A parallel session was chaired by Dr. Shalin Jain. Dr. Vinod Kumar Singh, an Assistant Professor in the Department of English at the University of Delhi, began the session by presenting his work on Tulasi Ramayana. He showed how “Tulsi employed literature to educate people and resisted cultural disintegration in his own time.” Thereafter, Dr. Prem Singh, an Assistant Professor at Jaynarayan Vyas Vidhyalaya at Jodhpur, elaborated on the Niranjani Sampradaya in Rajasthan and elucidated how nirgun bhakti traditions co-opted the message of Vedanta within bhakti traditions. Dr. Bharat Rathod, an Assistant Professor at Government Arts and Commerce College in Jaffarabad, then focused on the life, work, and message of guru Jagjivan Bapu in the Saurashtra regions of Gujarat. Shri Jay Pandya, a Doctoral Candidate at the University of Sydney, then explored “the role that saints and sages, like Pramukh Swami Maharaj, have played in the development of democracy in India. He highlighted how they have promoted democratic participation and contributed to discourses on secularism.” Thereafter, Shri Ishan Modi, a research scholar at Maharaja Sayajirao University of Baroda, presented on the works of Nishkulanand Swami, a disciple of Bhagwan Swaminarayan, and demonstrated how his works provide “critical resources to understand the history of the Sampradaya.” In a similar vein, Shri Sahaj Parikh, a graduate student at the University of California in Santa Barbara, presented on the poetic compositions of Brahmanand Swami and his corpus of works “in consolidating and disseminating the religious and secular teachings of Swaminarayan.”

The conference’s final session commenced with an address by Dr. Om Jee Upadhyay, the Director of Research and Administration at the Indian Council of Historical Research. He recognized the need for historians “to reconnect with our past, address the present, and contribute to the future.” The conference concluded with the address of Prof. Arvind Jamkhedkar, who recognized that “adaptation is required for historical change and to address the contemporary socio-cultural and religious contexts in rewriting history.” Dr. Jyotindra Dave then expressed his gratitude to all the scholars and students who contributed to the conference, making it a shared platform that facilitated meaningful interactions between different individuals, communities, and worldviews. 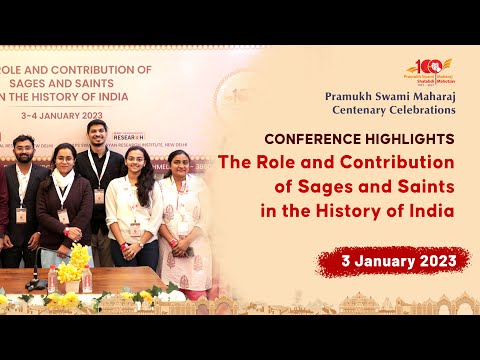 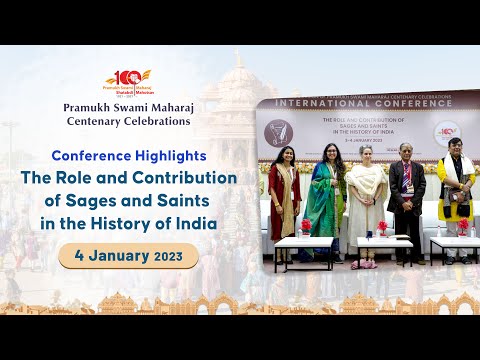