A special one-day conclave was organized today for members of the Confederation of Real Estate Developers Association of India (CREDAI) as a part of the centenary birth celebrations of His Holiness Pramukh Swami Maharaj in Ahmedabad, in partnership with CREDAI Gujarat, supported by CREDAI Ahmedabad GIHED and sponsored by Dharmadev Infrastructure.

The conference was led by a panel of high-calibre speakers, namely

The inaugural session included an inspiring motivational talk by Brahmaviharidas Swami, a senior swami of BAPS Swaminarayan Sanstha. He noted that we tend to lose hope on being constantly confronted with challenges. Quoting Pramukh Swami Maharaj, he said, “God affectionately supports those who face adversity with hope.” He added that the entire Pramukh Swami Maharaj Nagar is a shining example of delivering amidst challenges. He further said: “The key takeaway from Pramukh Swami Maharaj’s life is that we should continue to do good work and let others celebrate your good work.”

In a subsequent welcome address, Hemant Patel, Chairman of CREDAI  Gujarat, said, “100 conferences would be required to talk on Pramukh Swami Maharaj’s greatness!” Further shedding light on Pramukh Swami’s exemplary work, he said, “Pramukh Swami Maharaj, through his divinity and spirituality, created more than 1100 exquisite mandirs in India and around the world. It makes him an inspiration for us builders.”

Thereafter, an interesting moderated question and answer session followed with Rajnikant Ajmera, Chairman and Managing Director of Ajmera Group, in which he shared his insights on building a brand, family values, facing obstacles, lessons for young entrepreneurs, business principles, etc. He further added, “To maintain stability in life, faith in a religion is required. Pramukh Swami Maharaj would say we persevere fully and leave the end result to God.” He also said that practicing regular satsang has ensured that his family has overcome all problems.

Pujya Gyanvatsaldas Swami delivered an thought-provoking session on ‘Developing the Cultured Next Generation: The Real Property to Own.’ Shedding light on Pramukh Swami Maharaj’s teachings, he said, “If we do not impart values to our family, we will one day lose everything.” Further he appreciated the exemplary devotion of the family members of Rajnikant Ajmera that they start their routine only after performing their daily puja.

The conference concluded with a lecture by Rahul Patel, M/s of Patel & Co. Chartered Accountants, on GST. He shared his insights on legal issues in GST in the real estate industry. Appreciating the grandeur of ‘Pramukh Swami Maharaj Nagar’, he said, “The creation of such a mammoth and beautiful complex was only possible due to the blessings of Pramukh Swami Maharaj.”

Today’s event is the fourth in a series of 14 such conferences for professionals of various fields, including doctors, lawyers, industrialists, technocrats and entrepreneurs. It is a testament to the progressive mindset of Pramukh Swami Maharaj, whose work and teachings touched people from all walks of life, to ensure the holistic success and happiness of everyone in society. 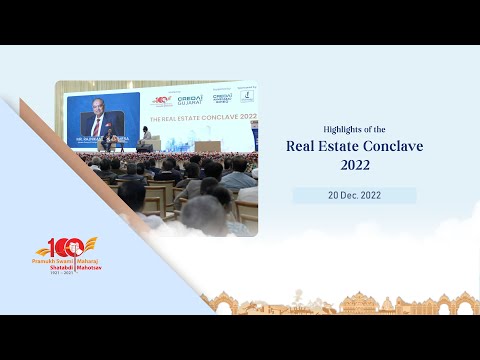