On 28 December 2022, as part of the daily Women’s Empowerment Programme at Pramukh Swami Maharaj Nagar, Dr. Ratankanvar H. Gadhavicharan (IAS, MBBS), State Project Director of Samagra Shiksha Abhiyan, spoke about her experiences of Pramukh Swami Maharaj and his contributions toward society. Having previously served as Municipal Commissioner of Gandhinagar, Industries Commissioner MSME (Micro, Small & Medium Enterprises), Deputy Secretary of Health, as well as in other capacities, Dr. Gadhavicharan recognized the seeds of woman upliftment that Bhagwan Swaminarayan had sown centuries ago whose fruits we are being enjoyed today. She said, “I am impressed with the extensive involvement of women in all aspects of the Pramukh Swami Maharaj Centenary Celebrations as this is a clear testament to the strength and skills that women possess. Whether one is male or female, if a person possesses virtues such as love, compassion, mercy and selflessness, then they have immense inner strength.” She emphasised that during such celebrations, it is important for everyone to understand and imbibe such good values for a better life. Dr Gadhavicharan added, “With the spirit of ‘Vasudhaiva Kutumbakam’ in mind, these celebrations are organised for the betterment of society and to spread the valuable teachings of Pramukh Swami Maharaj. We, too, should selflessly offer our services in any way that we can.”

Thereafter, Kusum Kaul Vyas, Director at Ayurnet Healthcare and Trans-sphere Technologies and Chairperson of Women’s Wing of Gujarat Chamber of Commerce & Industry, Proprietor at Zest Worldwide Communications and Managing Trustee at Utkarsh Healthcare Foundation India, addressed the audience by narrating her experiences with Pramukh Swami Maharaj. She said, “I have been fortunate to a part of several events in his presence where I could feel his positive vibrations. The first time I looked at him, his almond-shaped eyes attracted me to his face. They were deep as a lake, penetrating, and profoundly sweet. So it is no surprise that he spread sweetness, love and joy across the world.”

She was deeply touched by the contribution of BAPS temples around the world which continue to contribute significantly to society. She was particularly moved by the letter that the Sheikh of Abu Dhabi wrote to BAPS while decreeing the land on which the BAPS Hindu temple is being built. She quoted, “‘Till the sun and moon are in the sky, the land will belong to the Swaminarayan Sampradaya.’ This exhibits the credibility, respect and the honour that Pramukh Swami had earned from people across the globe.”

Ami Patel, Deputy Superintendent of Gandhinagar, appreciated the selfless service of the women volunteers currently serving in Pramukh Swami Maharaj Nagar. She recounted that she was deeply influenced by Pramukh Swami Maharaj’s guidance in a letter in which he had explained, “Women are mentally connected to God, and God is constantly guiding them onto the path of righteousness and spirituality through this mental connection and sincere prayers.” Just as Pramukh Swami Maharaj had said, she had experienced a direct connection with Mahant Swami Maharaj from the first time that she saw him. She shared her conviction, “It is important to remember that God always acts in our best interest. In my daily life, I draw strength from the following maxims taught by Pramukh Swami Maharaj, ‘In the joy of others lies our own’ and ‘Not even a leaf is capable of moving in this world without the will of God.’” 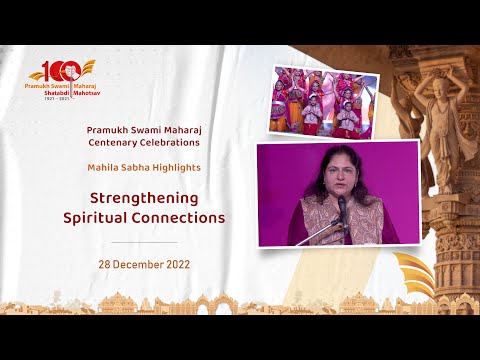