Ms. Mana Patel, an Olympic swimmer who has represented India at several international and national events including the 2020 Olympics, the South Asian Games, the Asian Championship, and the Asian Games to name a few. She has won 111 national and 32 international medals including holding 30 national records. She wholeheartedly thanked the women volunteers and said, “I feel honoured to be a part of the Pramukh Swami Maharaj Centenary Celebration. The theatrical performance ‘Prerna Pramukhraj’ at the Nari Utkarsh Mandapam was mesmerising and truly inspirational. It beautifully portrays and offers compelling solutions to relevant social topics of today’s society. I loved the expressions of the participants and it has been my absolute pleasure to be a part of this wonderful event.”

Further, she thanked her family and particularly the woman in her life – her “mother” who has been a strong pillar of support in her life. She concluded by saying, “Women have innate strength to excel in their lives. It is important to tap their unused potential and provide them platforms to nurture their skills and talents. It is imperative to provide an equal opportunity for them to grow and succeed.”

Dr. Dipika Saradava, President of BJP Mahila Morcha, Gujarat, paid tribute to Pramukh Swami Maharaj by saying, “In the Vedic era, women like Gargi and Maitri, who were knowledgeable and wise, guided and empowered society. In today’s era, Pramukh Swami Maharaj is blessing and empowering women through a variety of initiatives, with the aim of helping us get back to our roots. Today’s women are thriving in all parts of society and have advanced in various fields, from sports to cottage industries to the corporate world, from automobiles to space, and from education to the military. Women are responsible for illuminating the darkest corners of the world and their strength has positively impacted every sphere of society.”

“A family is strong when there are strong women leading it. It is evident that the volunteers here embody the phrase ‘Vasudev Kutumbakam’, and their strength is clearly visible all around Pramukh Swami Maharaj Nagar. We are blessed to have female ideals like Saraswatiji (Goddess of Education), Annapurnaji (Goddess of Food), and Laxmiji (Goddess of Wealth). We are blessed to be surrounded by strong women in prominent positions like the current President of India and the ex-chief Minister of Gujarat, to name a few. Women are playing a vital role in transforming our country.”

Recounting her divine experiences with Pramukh Swami Maharaj, she said, “In 1997, I was the standing committee chairman for Ahmedabad Municipal Corporation. Envisioning the creation of a circle at Shahibaug crossroads, we went to the BAPS Shahibaug temple with a proposal for the same. At that time, Pramukh Swami Maharaj sent his guidance that the circle should be such that it inspires and blesses the people who come across it. Pramukh Swami Maharaj was a visionary who went beyond the obvious and added a touch of spirituality.”

She concluded by saying, “Pramukh Swami Maharaj inspired millions but now it’s our turn to preserve our rich heritage.” 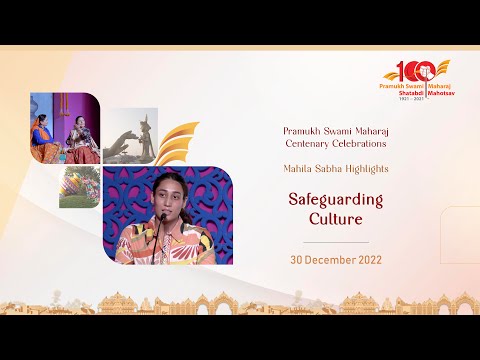