On 6 January 2023, a special program was organized by the BAPS Women’s Wing of the Gulf Cooperation Council (GCC) at the Women’s Empowerment Hall in Pramukh Swami Maharaj Nagar, where they highlighted the journey of Satsang in the Gulf countries.

“In 2019, finally the wishes of devotees in the UAE were fulfilled. They got to experience the eagerly awaited moment of the arrival of His Holiness Mahant Swami Maharaj and the stone laying ceremony. On 20 April 2019 Mahant Swami Maharaj, in the presence of government officials, renowned dignitaries and 5,000 devotees, performed the puja of the first stone of this official place of worship, the BAPS Hindu Temple and invoked the presence of Bhagawan Swaminarayan on this land. This temple will be the symbol of a pious wish made by Pramukh Swami Maharaj almost 20 years ago of establishing mutual love and harmony.

“It is the first temple symbolizing Hinduism in Abu Dhabi. The temple highlights the concept of equal respect to all the religions as well as the Vedic idea of the world being one united family. In the foundation of this temple lies love, harmony and respect. Along with the construction, various social, cultural as well as spiritual activities are currently taking place on the site.”

“During Pramukh Swami Maharaj’s visit to Bahrain in 1997, then King of Bahrain, His Royal Highness Sheikh Isa bin Salman Al Khalifa requested Pramukh Swami Maharaj to make Bahrain his home. 1 February 2022 became a historic day for Indians residing in UAE as well as all around the world when Indian Prime Minister Shri Narendra Modi informed the world about the building of BAPS Swaminarayan Hindu temple in Bahrain through his tweet.”

“Pramukh Swami Maharaj has left no stone unturned when it came to uplifting people’s lives. He has even reached the people of the UAE and as a result, Bahrain is blessed with a beautiful satsang community. With the divine inspiration of Pramukh Swami Maharaj, the women of the Gulf Cooperation Council are progressing socially as well as spiritually. These women feel bliss and peace as they have the guidance of their guru Pramukh Swami Maharaj and Mahant Swami Maharaj.

“‘Religion is what spreads mutual love for all’ – this is how Pramukh Swami Maharaj defines religion. This is reflected in the creation of the BAPS Hindu Temple in Abu Dhabi which Mahant Swami Maharaj will be inaugurating on 14 February 2024, the auspicious occasion of Vasant Panchami.” 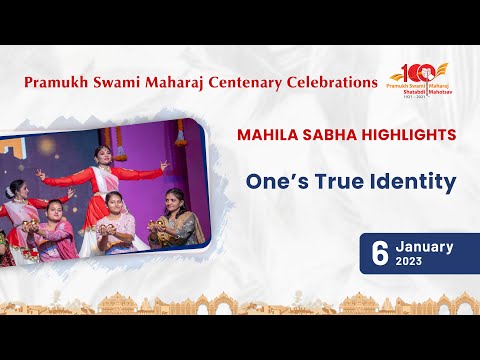