Instilling Values in an Unborn Child On 2 January 2023, the BAPS Women’s wing organized a seminar on Garbh Sanskar at the Women’s Empowerment Hall in Pramukh Swami Maharaj Nagar.

Dr. Monika Vasani, Ayurvedacharya, Founder of Dream Baby Garbh Sanskar and a Medical Officer with over a decade of experience delivered a seminar on the importance of Garbh Sanskar, describing the values to be instilled in the womb. Dr. Vasani said, “One of the reasons for the high crime rate in society is the neglect of value cultivation in young children. As per Socrates, child development starts in the mother’s womb. Comparing a young child to a seed, Pramukh Swami Maharaj said that significant improvements must occur in the seed and not the mature tree. Similarly, values must be instilled from the moment a child is conceived.”

Elaborating upon the need to model the values one wishes to foster in children, she said, “Parents’ characters are significantly responsible for the values a child imbibes. Raising a child is perhaps the most important project for parents, so we must pay utmost attention at the early stages of a child’s life. That is why according to Hinduism, Garbh Sanskar is the first of the 16 sacraments for individuals.”

“Our scripture, Charaksamhita, says that there are, in all, six mediums through which a foetus imbibes values. These include both parents’ character, biological cycles, thought processes, behaviour, outlook, etc. It thus becomes imperative for the parents to ensure and consciously adopt a valued and disciplined lifestyle for the sake of their children. For these reasons, Mahant Swami Maharaj has advised that pregnant women should read spiritual books to ensure the inculcation of spiritual values.

“A child in the womb can hear from the 4th month. Scientists have shown that cells responsible for hearing are near the top layer of the skin. This automatically increases the child’s grasping power in the womb, resulting in the formation of lifelong impressions.”

Finally, she concluded by adding, “Good character creates a good society, but a good character is built right from the mother’s womb. For this, parents must be aware and stay informed about raising a good child from the very early stages to create a better society.”

“Pramukh Swami Maharaj’s personality was so magnanimous that words fall short of describing it. He was a ‘Yug Purush’ and a great soul like him comes only once in a century. His thought process, demeanour, dedication to serve society and people-oriented persona made him unique. He spent his whole life helping others.”

Recounting a divine experience she had of Pramukh Swami Maharaj, she said, “In 2000, Mrs. Yogini Brahmbhatt, a satsangi, gave me an outline of Pramukh Swami Maharaj’s life. I studied the outline and spoke to people about him from the information I had read. Since I had never personally seen him, Mrs. Yogini invited me to the Shahibaug mandir. Words cannot explain the feeling of absolute bliss I experienced upon seeing him. He positively impacted my life and made me understand that while focusing on science, technology, education, and policy planning is vital, it is equally crucial to serve society.”

She further applauded the work of Pramukh Swami Maharaj and BAPS in the 2001 Gujarat earthquake, saying, “When we learned that BAPS was involved in massive earthquake relief work, we decided to do our part by donating a Qualis car for the swamis and volunteers. Our aim was to give a token in the relief work to ensure better services to the affected in remote areas. Many affected villages and people received relief under the guidance and inspiration of Pramukh Swami Maharaj. After this experience, I have always felt his blessings with me.”

She concluded by saying, “I always feel like Pramukh Swami Maharaj is residing in my heart, mind and soul. We should all always follow in his footsteps.”

Dr. Neeta Goswami, BASM, former Chairperson GCCI, Ahmedabad, addressed today’s seminar by paying tribute to Pramukh Swami Maharaj on his birth centenary. She said, “The light of Pramukh Swami Maharaj’s life and work has illuminated my heart. Just the way God has created the sun and the moon, he has also created saints like Pramukh Swami Maharaj for the upliftment of society. His magnificent creations are the glory of India.”

She further explained the role of the Guru in life and said, “When we are not clear about our goals, we should take refuge in a competent Guru who can show us the right path. The Guru has a direct relation with God and he spreads the light of God in this world.”

Expressing her admiration for Pramukh Swami Maharaj, she stated “We are celebrating the centenary of the Guru who was close to God, or I would rather say similar to God. He was a Saint who had no expectations from society but instead dedicated his entire life to the bliss of people. No person can be more capable than him.”

She concluded her speech by saying that “We shall consider ourselves fortunate that such saints bring reforms to make our lives worthy and blissful. Hence, I thank God immensely for providing me the opportunity to be a part of such majestic celebrations.” 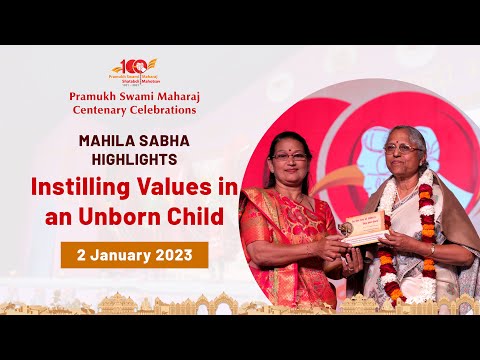