On 9 January 2023, a special program titled ‘Katha Kahu Ek Yug Purush Ni’ was organized by the BAPS Africa Women’s wing in the Women’s Empowerment Hall at Pramukh Swami Maharaj Nagar. The vibrant program enthralled the audience with traditional musical dances of Africa and India, highlights from Pramukh Swami Maharaj’s spiritual travels in Africa as well as an inspirational skit depicting a personal incident of a devotee who was facing many challenges of life with unshakeable faith in God and unwavering strength.

Some volunteers shared their experiences of how Pramukh Swami Maharaj transformed their lives by building temples and starting the weekly assemblies in Africa.

Ms. Alpha Mehta, BAPS Women’s Wing volunteer from South Africa, said “When I came to South Africa with my husband and son, we did not know anyone. But, upon visiting the BAPS Swaminarayan Temple in South Africa, I felt a sense of belonging. While I was new to the BAPS Swaminarayan Sanstha, everyone would patiently answer my questions about theology and spiritual practise. My curiosity led me to read the Swaminarayan scriptures, which further resolved my questions. I felt enlightened by the weekly assemblies and started getting involved in serving the community. These activities transformed me into a very productive and confident person.”

“When I initially came to South Africa, I barely knew how to cook basic recipes. Every week we would gather in the mandir to listen to spiritual discourses and celebrate the festivals. It was during these festivals that I learned many skills like how to cook various dishes, perform in various creative programs, and work together with groups of people to accomplish a goal. Later, when I met my in-laws in India, they were shocked to see how much more of an Indian I had become after moving to South Africa. I am so grateful for the BAPS community and mandir in South Africa as it is due to them, the current and upcoming generations will retain the values of our culture and refrain from the vices that are otherwise prevalent in society. The impact of the temple as well as its activities is so widespread that people from various professions are extending their support to encourage us. ”

Mrs. Jyonita Patel, a baker from Lenasia, South Africa, recounted an incident in which she discussed the influence of her strong, cultured mother in her life. She said, “My mother requested me to bake an aeroplane cake for Swaminarayan Bhagwan while we were planning for the Hindu New Year Celebrations in the BAPS Swaminarayan Mandir. But because of my prior poor experiences with baking, I was hesitant. She offered me encouragement and courage by reassuring me that Pramukh Swami Maharaj will lead me. She even persuaded a seasoned baker to instruct me in the art of icing. Today, I am a professional baker and I owe my success to her and Pramukh Swami Maharaj. When I reflect on this incident, Pramukh Swami Maharaj’s wise words come to mind, ‘One cultured mother is equal to 100 excellent teachers.’”

“My mother was the glue that bound my family together. So when we lost my mother, my family and I were completely shattered. But Pramukh Swami Maharaj gave me the strength to look after my family in these trying times. It is because of him that I have transformed into the self-assured and self-reliant person I am today.”

Mrs. Sarasvati Jivan, a teacher from Lenasia, South Africa, said, “I feel blessed to be a small part of Pramukh Swami Maharaj’s Centenary Celebrations. Although I have anchored many events in the past, none of them have given me the same excitement that I felt when I got onto the stage today.”

“Pramukh Swami Maharaj always said a mandir brings a community together. I had the pleasure of seeing those words come to life when we were building the temple in Johannesburg. People from different communities offered their services, some offered their time while some offered their resources. This helped bring us closer together.”

On this occasion, Dr. Jyoti Pandya Sheth was felicitated in the Women Empowerment Exhibition Hall.

Dr. Jyoti Pandya Sheth, National Vice President Mahila Morcha, BJP Gujarat, Former Mayor of Vadodara, Gujarat, expressed, “Magnificent is the only word that comes to mind when I think of this Nagar. The positive vibrations emanating from here will spread across humanity and will in the future help us survive peacefully. I am blessed to have had the opportunity to attend this program. The entire team of 80,000 volunteers has left a legacy for the world to follow.” 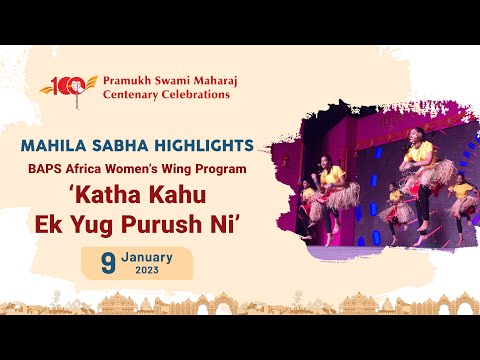